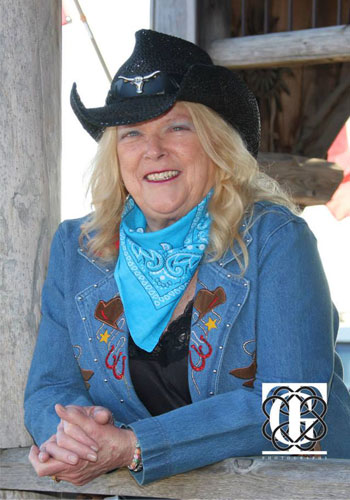 I came from a small town in Southwestern Ontario called Mooretown which, at the time, had a population of about 60 people. As a child I watched my aunts, uncles, and dad play music. I learned how to play rhythm guitar at the young age of 11 and had already been playing piano years before that. I so loved music!

I sang all the time and announced to my neighbours I was going to be a star one day. Well, I guess with the title “1st Lady of Bluewater Country” I am! I was given that title by a man I met in Port Huron, Michigan. His name was Louie Cline. I thought he was an uncle or at least a relation to Patsy Cline. He wasn’t related; he just loved my singing.

I purchased a Stella 12 string guitar and then traded it in for a Goya. After saving enough money for a brand new Gibson J45 in 1974 I found it was the best guitar ever and I still have it. It now looks like a Willie Nelson guitar….very well played!

As a guest I’ve sung with The Rhythm Ramblers (Lloyd Sarrs), The Jubilares, Roger Quick and the Rainbows, plus many others. I formed my own band “The Foggy Mountain Band” which included a local fiddle player (Bill Alexander), my brother on banjo, my sister on piano and myself on guitar. Dad joined us later and that’s how I got started with everything just falling into place.

I’ve worked in the USA from Arizona (Sun Downer Lounge, King Man Arizona), Florida (The Orange Bar) to Indiana (VFW Club, Rochester). In Ontario, I have worked as far north as Matachewan, Kirkland Lake, Ottawa, Ompah, Renfrew and Smith Falls. In Quebec at The Gatineau, Sherbrooke, and many other venues.

In Southern Ontario, Purple Hill Country Hall in Thorndale has featured me many times along with other very talented country performers. The Dow People Place and Canatara Band Shell in Sarnia have been a familiar place to entertain for many years now on a regular basis. The International Plowing Match held in Glencoe was definitely a memorable event as well.