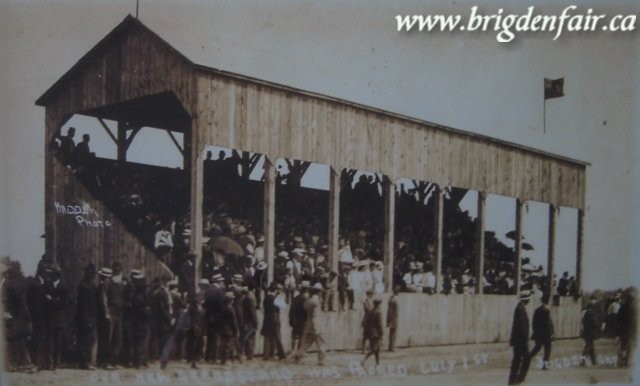 The first Brigden Fair was held in 1850 at Riley’s Tavern and featured only cattle and horses. For the next four decades, the location would alternate between Mooretown and Corunna, and later between Courtright and Brigden, until settling into the current grounds in 1889. Prior to 1928, only Moore residents could be exhibitors; however, “Open to the World” was declared that year and exhibits were opened to an unlimited area.

Fall Fairs are a time-honoured rural tradition throughout Ontario. The earliest agricultural society was formed at Niagara-on-the-Lake in 1792. Other societies followed, and they would hold fairs with butter, cheese and maple sugar. In 1834, a prize was offered for “Best Servant!” [Read more about the History of Lambton’s Fall Fairs on lambtonmuseums.ca]

Two sets of portable bleachers are purchased to replace the permanent grandstands that were removed due to safety concerns.

Brigden Fair wins the ‘Fair of the Year’ award from World’s Finest Shows at their annual banquet, held in conjunction with the Ontario Fairs convention.

Brigden Fair wins the ‘Most Improved’ award from World’s Finest Shows at their annual banquet, held in conjunction with the Ontario Fairs convention.

Some highlights this year included constructing a new exit lane in the parking field and purchasing new chairs in the Exhibition Hall. The Flying Fools High Dive Show survived chilly weather to entertain crowds of all ages.

As the horse shows continue to expand rapidly, it was time to keep pace and construct a new horse ring in the existing parking lot. This moved all light horse shows and their accompanying entourages into the field, providing them more room and a safer environment for fair goers walking down the roadways. A highlight this year was the introduction of a heavy horse pull, featuring teams from all over Ontario.

Major deferred maintenance was completed this year with improvements being made to the Poultry Barn and the Commercial Building.

After a major fundraising effort, one of the most significant accomplishments of the decade was made when the new washrooms were completed in the end of the Poultry barn. This allowed modern and clean facilities for exhibitors,vendors, visitors and volunteers at the south end of the grounds. Major funding was provided by an Ontario Trillium Grant.

This year saw the introduction of major new entertainment features. The Ontario Lottery Corporation stage and entertainment was a huge hit featuring great local talent and country music singer Julian Austin. The West Coast Lumber Jacks and the Mini Pullers were also big hits. Renovations were also completed in the Exhibition Hall kitchen, including a convection oven for pies, a new dishwasher and more room for volunteers to work.

The brigdenfair.ca domain is registered and we join the world wide web

This year saw the second of a major tiling project around the grounds being completed.

A celebration kick-off for the first 150 years of the Moore Agricultural Society and the Township of Moore was completed with a spectacular fireworks display. Construction of ten portable bleachers was completed, in addition to the first stage of land improvements. To all the members, volunteers, past presidents, and all those associated withe Moore Agricultural Society and the Brigden Fair a hearty “Thank You” from the citizens of our area for the forethought and guidance that has brought the society to this point at this time.

More building improvements this year, with barn roofs being taken care of.

Brigden Fair is presented the “Anna Woodley Award” from Conklins. This award is for the best overall fair package and is an honour to achieve. Major electrical upgrades were always undertaken around the grounds.

The need for more accurate planning and accountability saw the development of a budget committee. Queenie also became the official office cat. At first she caught mice, then she graduated and started greeting visitors from her position on the front office counter.

The Exhibition Hall was expanded to accommodate larger washrooms, storage tables, chairs, and a bar. Space was also provided for Conklins in the paddock area for their tralers used for living accommodations and this allowed for more space on the midway for rides.

A summer student was hired to assist the “Agriculture In The Classroom” program by producing an agricultural manual. A sidewalk to the Exhibition Hall from the office was built with benches to rest on the way. This was a year for rewards as one of our members received “Volunteer of the Year” recognition which was given out by the Canadian Association of Fairs and Exhibitions for initiating new programs. We also received “Fair of the Year” award at the Conklin’s Award Night.

Long range planning was initiated and the development of a written “Mission Statement”. A plan to re-organize the office from one large room to a reception area, two offices, storage, and a work area was also put into place and accomplished.

“The Poughman” left his home at the Brigden Fairgrounds and safely travelled to the site of the International Plowing Match which was held just west of Petrolia.

For the 140th year of celebration of the Moore Agricultural Society and the Brigden Fair 140 native trees were planted on the Fairground property and a commemorative medallion was designed.

A workshop is built onto the south end of the existing Junior Building. Society member Alvin Wanner donated his woodworking and repair tools for use by the society.

The Quonset building housed “BRAVO CANADA” a hands-on learning opportunity for visitors to learn more about some of the major environmental issues facing all Canadians.

The new main gate off Courtright Line (Highway 80) was erected in recognition of the services of the pioneers who had the foresight to found the Moore Agricultural Society and to the members and volunteers who have perpetuated and promoted agriculture in our area and at the Brigden Fair since 1850.

“Early Morning Down on the Farm” officially became the property of the Moore Agricultural Society. Nicknamed “THE PLOUGHMAN” he stands on guard at the original main gate of the Brigden Fair.

The Society advanced into the modern technological era when it purchased its first computer.

The Exhibition Hall is constructed to house more displays

The Moore Agricultural Society applied for Class “A” status which required a minimum of ,000.00 in prize money. This classification was connected to federal grants known as Hays Classification. By the 1980’s no other fairs were allowed in. Also in 1973 the Brigden Fair was expanded to a three day fair.

February 19th, the female volunteers organized and became a division of the Moore Agricultural Society with their own executive. Since then they have participated in and been instrumental in many events. Amy (Poland) Dawson was responsible for designing the first logo for the Brigden Fair. Their first hospitality kitchen has expanded and now has an extensive menu to attract the tastes of many fair goers. The ladies strive to have a varied list of items for the exhibitors at the fair also.

Following judging all items are attractively displayed and education has been a part of their mandate for many years as they provided demonstrations from cooking to making teddy bears and dolls.

Wednesday October 4th “100 Years of Progress”, “What a picture of agricultural development hangs on memory’s wall” – quotes from the 1950 edition of the fair book.

At this time the Moore Agricultural Society applied for Class “B” status. This allowed the Society to apply for Federal Grant money. It took the Society six years to build up an average of ,000.00 in prize money. To meet this new image the directors began an ambitious plan to construct two horse barns, two cattle barns, a sheep and swine barn, a poultry barn, and Junior Fair and Administration buildings. The buildings have proven to be very valuable as the weather during a typical fair can vary from hot and sunny to cold and snowy.

In 1950 the quonset building was erected for displaying exhibits. Now commercial vendors use the facility at fair time to display and sell their products.

Admission fee to the fair was 35 cents per adult and 35 cents per car to park. Today admission to the fair is .00 per adult, there is free parking on the fairgrounds, and elementary school age children are admitted free.

The Brigden Fair was rated as the “Best One Day Fair In Ontario”.

1910s
1915
The present site was purchased and over the years has grown to . Originally the fair was directed only towards the men with their livestock. Later crops were displayed and the ladies began to exhibit their domestic skills and share thier homemaking talents. Now many children also exhibit.

The #OPP #motorcycle seems to be the most popular vehicle that #LambtonOPP has on site this weekend. Come down to the @brigdenfair and see all the specialty vehicles the OPP has brought. Learn about motorcycle safety and speak with one of our qualified motorcycle operators. ^jb