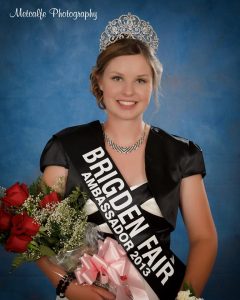 What was once a childhood dream has become reality for 18-year old Kaitlynn Anderson of Mooretown, who was crowned as this year’s Brigden Fair Ambassador on August 14th by the 2012 Ambassador, Courtlyn Fiddler.

Anderson is a second year student at the Brescia campus of the University of Western Ontario, where she is majoring in Accounting and Psychology. When Anderson graduates, she does not know where she would like to work, however, her dream is to farm and she is willing to do whatever it takes to achieve this. She believes that her degree, which combines many essential skills needed to successfully run a farm, will assist her in making this dream a reality.

For seven years, Kaitlynn has been a member of 4-H. Participating in clubs such as Conservation, Sheep and Field Crops has assisted her in strengthening her agricultural knowledge. The clubs that Kaitlynn has been a part of have participated in the Brigden Fair, whether it is entering crops, showing ewes or creating a display board at the fair. She has gained a lot of knowledge and memories from these experiences.

This Sarnia Collegiate Institute and Technical School graduate has always lived on a farm, and has learned some of the most important lessons from everyday farm life. “I’ve learned that the things we put our hopes and dreams into are the most worthwhile. I’ve learned that nothing comes easy, and sometimes things are more easily lost than gained. I’ve learned that what you see can be completely different than the truth, and that you need to do your research and investigate before jumping to conclusions.”

“My dad always says that, here, every day is a day in paradise,” said Anderson, who loves helping out on the farm in whichever way she can. While Anderson is away at school, she loves to teach others about agriculture.

This summer, Anderson worked for the St. Clair Township within the parks and recreation department. She thoroughly enjoyed working outdoors and hopes to return next year. Working for the Township provided Anderson with a greater respect for the many facilities and services available to our population.

Anderson hopes that she can inspire others of all ages to volunteer and participate in activities within their communities. Since 2007, Anderson has been raising money for WaterCan, which provides clean water, sanitation facilities and hygiene education to the people of Ethiopia, Kenya, Tanzania and Uganda. She has also volunteered for the Cinderella Story of Sarnia Lambton, which provides girls from lower-income families with a dress for their graduation or prom. She was a medal bearer for the 25th Anniversary Rick Hansen Relay, and recently received a Queen Elizabeth II Diamond Jubilee award. Anderson has been involved within her schools and community in many other ways, including a previous youth group, PAIRS (Partners Active in Resource Sharing), various other clubs in high school and the Race to Erase (this Fall).

While reigning as Brigden Fair Ambassador, Anderson will be present at the Brigden Fair this October 11th – 14th, the Ontario Association of Agricultural Societies convention in February, as well as the CNE in Toronto next August.

First runner-up for the 2013 Brigden Fair Ambassador was Taylor Myers, and the other contestants – also part of the Ambassador Court – included Jerica Trowbridge and Rebecca Dawson.