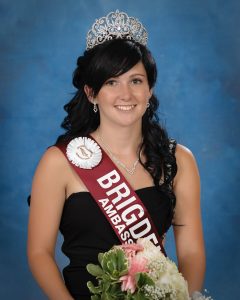 Courtlyn’s great grandfather, Ken Anderson was the Brigden Fair president in 1971 and it has been a tradition for her family to attend for as long as she can remember.

Courtlyn has been a part of the Brigden Fall Fair by being a craft exhibitor since she was young. As a talented artist she has won the fairs poster contest several times. In 2010 her poster ‘Promoting Brigden Fair’ was chosen to move onto the district 13 level placing first place, it then was sent onto the Ontario Association of Agricultural Societies (OAAS)convention in Toronto where it won first place again. Courtlyn has worked with her grandfather Bruce Anderson being a part of the Agriculture in the Classroom program, helping to teach the elementary students about the horse industry on the Friday of the fair.

Horses are a very important part of her life and she has being riding since she was very young with her family. Recently she has taking her riding to a new level becoming a part of the ‘Encore Presentation’ trick riders. She performs with them as a trick rider and roper and is part of the DODGE Ram Rodeo series all across Ontario. They will be performing a half time show on Saturday, during the Team Sorting event in the coliseum.

Courtlyn is also looking forward to working with first runner up Taylor Myers, together they will be carrying out various tasks all around the fairgrounds. The competition was very close and the judges has a very hard decision to make. During the competition, the contestants had to give a speech, answer an impromptu question and change into an outfit that best describes their main interest or hobby. Judges for the evening’s competition were Lorna Sellers, Tim Williams and Derek Givern

Courtlyn will also be attending many community events all throughout the year representing Moore Agricultural Society, Home of the Brigden Fair. She will also be attending the OAAS Convention in Toronto in February, meeting with the ambassadors from all across Ontario. Courtlyn will not be able to compete in the CNE Ambassador Competition next August as she won’t be old enough at the time of the competition.

Courtlyn will be returning to L.C.C.V.I., Petrolia again this fall entering into grade 11. After high school, she hopes to persue a career as a hairstylist / esthetician.